MOSCOW (AP) — Russian scientists have recovered a giant chunk of the Chelyabinsk meteor from the bottom of the lake it crashed into.

A meteor that blazed across southern Urals in February was the largest recorded meteor strike in more than a century. More than 1,600 people were injured by the shock wave from the explosion, estimated to be as strong as 20 Hiroshima atomic bombs, as it landed near the city of Chelyabinsk. 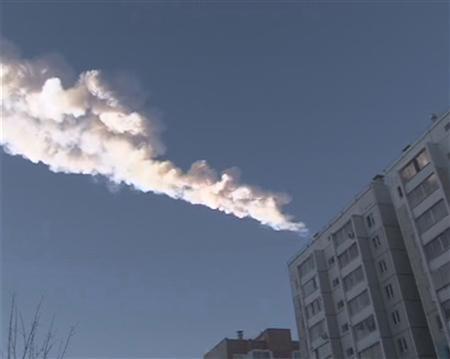 [5]
(Reuters) - About 400 people were injured when a meteorite shot across the sky in central Russia on Friday sending fireballs crashing to Earth, smashing windows and setting off car alarms.
[6]

[8]
The meteorite raced across the horizon, leaving a long white trail in its wake which could be seen as far as 200 km (125 miles) away in Yekaterinburg. Car alarms went off, windows shattered and mobile phones worked only intermittently.
[9]

"I was driving to work, it was quite dark, but it suddenly became as bright as if it was day," said Viktor Prokofiev, 36, a resident of Yekaterinburg in the Urals Mountains.

"I felt like I was blinded by headlights," he said.

No fatalities were reported but President Vladimir Putin, who was due to host Finance Ministry officials from the Group of 20 nations in Moscow, and Prime Minister Dmitry Medvedev were informed.

[12]
Reports conflicted on what exactly happened in the clear skies. Emergencies ministry spokeswoman Irina Rossius told Associated Press that there was a meteor shower, but another ministry spokeswoman, Elena Smirnikh, was quoted by the Interfax news agency as saying it was a single meteorite.
[13]

"There was panic. People had no idea what was happening. Everyone was going around to people's houses to check if they were OK," said Sergey Hametov, a resident of Chelyabinsk, about 930 miles east of Moscow, the biggest city in the affected region.

"We saw a big burst of light then went outside to see what it was and we heard a really loud thundering sound," he told The Associated Press by telephone.

A hole in Chebarkul Lake made by meteorite debris. Photo by Chebarkul town head Andrey Orlov.

[56]
Thanks to the proliferation of new technologies like CCTV and dashboard cameras in cars, the dazzling meteor shower that hit the far-western Siberian region may be the first event of its kind in history to be filmed from almost every angle.
[57]

"My ears popped, the windows in our building are smashed, everyone says an airplane exploded. My cellphone stopped working for awhile," said one witness from Chelyabinsk.

"I was driving to work and suddenly there was this flash that lit everything up like bright sunlight," said another. "The shock wave nearly drove me off the road."

Close to 1,000 people were reported injured, but only three seriously enough to be hospitalized, according to the official RIA-Novosti agency. Windows were blown out across a wide area, and several buildings were reported damaged, including a Chelyabinsk factory, whose roof caved in.

Pieces of the meteor have been reported coming down across several regions in western Siberia and even nearby Kazakhstan. Russia's Defense Ministry reported that soldiers have located a 20-ft.-wide crater near a lake in Chelyabinsk region.