[2]
NEW YORK — Victims of Superstorm Sandy in New York and elsewhere in the Northeast were comforted Thursday by kinder weather, free holiday meals and — for some — front row seats to the annual Macy’s Thanksgiving Day Parade.

The popular Macy’s parade, attended by more than 3 million people and watched by 50 million on TV, included such giant balloons as Elf on a Shelf and Papa Smurf, a new version of Hello Kitty, Buzz Lightyear, Sailor Mickey Mouse and the Pillsbury Doughboy. Real-life stars included singer Carly Rae Jepsen and Rachel Crow of “The X Factor.”

The young, and the young at heart, were delighted by the sight and sound of marching bands, performers and, of course, the giant balloons. The sunny weather quickly surpassed 50 degrees.

The annual Macy’s Thanksgiving Day Parade kicked off in New York, putting a festive mood in the air in a city still coping with the aftermath of Superstorm Sandy.

The young, and the young at heart, were delighted by the sight and sound of bands, performers and, of course, the giant balloons. The sunny weather quickly surpassed 50 degrees. Some parade-goers had camped out to get a good spot, staying snug in sleeping bags. Others came well-prepared with folding chairs. 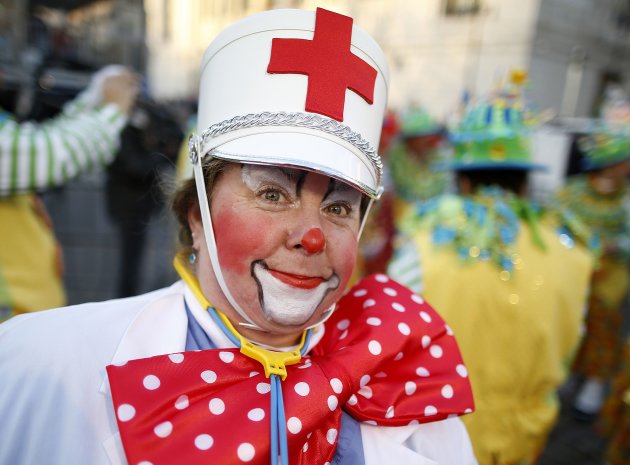 [10]
Over the past 88 years, the Macy's Thanksgiving Day Parade has become an irreplaceable staple of Thanksgiving festivities.

Every year, millions of Americans flock to the streets of Manhattan to see the parade in-person or gather around their television sets to watch the parade from home.

What began asa small Macy's employee-run event has morphed into a huge production that requires almost an entire year's worth of preparation.

Most years, the parade has gone on with little complications, but others, weather delays and balloon-related injuries have created a nightmare for parade officials.

The first-ever Macy's Day Parade actually took place on Christmas of 1924. Macy's employees dressed as clowns, cowboys, and other fun costumes, and traveled with Central Park zoo animals and creative floats a lengthy six miles from Herald Square to Harlem in Manhattan.

The parade was meant to draw attention to the Macy's store in NYC, and the gimmick worked - more than 250,000 people attended the inaugural Macy's Day Parade. It was decided that this NYC parade would become an annual NY event in Manhattan.

In 1927, Felix the Cat became the first giant balloon to ever take part in the Macy's Day Parade. In 1928, Felix was inflated with helium, and without a plan to deflate this massive balloon, NYC parade organizers simply let Felix fly off into the sky. Unfortunately, he popped soon thereafter.

The Macy's Day Parade continued to let the balloons fly off in subsequent years, only these balloons would have a return address written on them, and whoever found the balloon could return the balloon for a prize from Macy's. However, the results of this experiment weren't exactly successful.

[13]
The first Macy's Day Parade was on November 27 in 1924 and was referred to as the Macy's Christmas Parade. The parade originally featured Macy's employees and live animals from the Central Park Zoo. Floats, instead of balloons, were the main attraction.
[14]

Macy's tradition began in 1924 as a Christmas celebration intended to promote the store. Macy's employees, dressed as clowns and cowboys, made up the majority of the marchers, travelling six miles from Harlem to Herald Square. Early parade floats (like Santa's, pictured, in 1925) were pulled by horses. Almost 250,000 spectators showed up, inspiring Macy's to make it an annual affair.

A Captain Nemo float makes it way through the streets of Manhattan during the 1929 Macy's Day Parade.

The parade began in Harlem at 145th Street and ended in front of the Macy's flagship store on 34th Street. It was originally called the Macy's Christmas Parade, but was renamed the Macy's Thanksgiving Parade in 1927.

The parade passes down Broadway in 1930.

Initially, the balloons didn't have a safety

valve to release the helium, so they were released into the air at the closing of each year's parade. Each balloon had a return address label attached to it.

Beginning in 1929, Macy's began offering a $50 reward to anyone who returned a balloon. This only lasted until 1932, when Macy's found it to be a safety hazard. Pilots were beginning to attempt to catch balloons mid-flight, which was obviously not a smart idea.

A Teddy Bear balloon passes through Times Square in 1945.

The Radio City Rockettes appeared in the parade for the first time in 1957.

For the past 55 years, the Rockettes have been a staple of the Macy's Day Parade.

In order to be a Rockette, a dancer must be between 5'6" and 5'10½" and demonstrate proficiency in tap, jazz, modern dance, and ballet. They must also be able to perform the signature eye-high kick.

The classic "Macy's Thanksgiving Day Parade" logo was last used in 2005. Since then, a new logo has been created every year. The only place the original logo can still be found is on the jackets of the parade staff.

Besides being used in publicity material and the ID badges worn by the parade staff, the official parade logo is rarely seen. NBC's coverage does not even show the official Macy's parade logo. They create their own.

A hippo balloon floats in the 1940 parade: Before balloons became the event's major draw, live animals were led down Manhattan streets. For the parade's first few years, animals from the Central Park Zoo joined the marching bands and clowns on the procession route.

Since it began in 1924, the parade has been staged every year except 1942, 1943, and 1944, when a World War II helium shortage prevented the balloons from taking flight. The helium problem resurfaced in 1958, but instead of scrapping the balloons altogether, Macy's had them lifted by cranes down the parade route.

After TV networks began broadcasting the parade, the six-mile route was shortened to just over 2.5 miles to more easily accommodate TV crews. (A dinosaur float from 1963 is pictured here.) The televised parade has had numerous hosts over the years, including Willard Scott, Sandy Duncan, and, of course, Matt Lauer and Katie Couric. But from 1962 to 1971, NBC's coverage was hosted by TV's Golden Girl, Betty White.

[31]
At the conclusion of the parade, the giant balloons were released into the air. In 1929, Macy's began offering a $50 reward for any returned balloons, which were affixed with return address labels [source: ABC News]. In 1931, pilot Col. Clarence E. Chamberlain snagged a balloon with his airplane's wing, leading to a ban on retrieval by airplanes the following year. But after the 1932 parade, another pilot attempted to capture a balloon and nearly crashed, leading Macy's to discontinue releasing the balloons at the parade's end [source: ABC News].
[32]