Not just a great valley, but a shrine to human foresight, the strength of granite, the power of glaciers, the persistence of life, and the tranquility of the High Sierra.First protected in 1864, Yosemite National Park is best known for its waterfalls, but within its nearly 1,200 square miles, you can find deep valleys, grand meadows, ancient giant sequoias, a vast wilderness area, and much more.

[4]
In the Northwest corner of Wyoming lies Yellowstone National Park, the oldest, largest and most popular National Park in the continental United States. Few places on earth offer so much scenic and scientific interest in one area. Yellowstone is in the heart of the Rockies, a land of pine-clad mountains and broad, grassy valleys. The countryside is laced with lakes and streams of exquisite beauty.
[5]

If close encounters with large predators, hiking cliffside trails, and venturing into remote, mountainous terrain are not your bag, then may we suggest driving past the entrance gate to Glacier National Park? On the other hand, if unparalleled scenery and the opportunity to see the full lineup of wildlife that greeted Lewis and Clark when they swung through Montana is your notion of a great vacation spot, then Glacier is your kind of park.

Named for the rivers of ice that continue to carve its spectacular alpine landscape, Glacier continually ranks as the most pristine of America's national parks and the one people would most like to revisit.

The Grand Canyon, one of the oldest national park of the United States, is a fine specimen of nature’s untamed beauty. The eroding feature of the mighty Colorado River led to the formation of the Grand Canyon. The Grand Canyon cannot be considered a

s the deepest canyon as there are other deeper ones but its significance lies in its vast size and it diverse color. 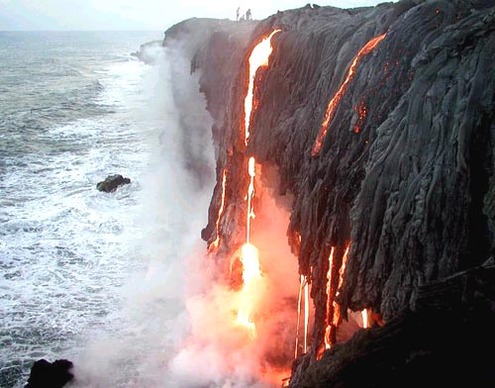 Big Bend National Park is blessed with an exceptional array of plant and animal life. In the desert grow succulents such as lechuguilla (a type of agave), yuccas like the impressive giant dagger species, numerous types of cacti such as prickly pear, and abundant grasses and shrubs such as ocotillo, candellila, and sotol (all of which have numerous practical uses), as well as the famous century plant (or Havard agave), which only blooms once in a lifetime and then dies. The best time of year to see the gorgeous cactus blooms is March and April and the mountains are another great place to see wildflowers. In the mountains and near the water grow pleasantly surprising stands of juniper, ponderosa pines, piñon pine, douglas fir, Texas madrone, quaking aspen, the unique Chisos Oak (one of five Oak species here), and many others.

Big Bend is one of the best bird-watching areas in the country, as many birds pass through here along migratory routes — more than 450 species. Big Bend is the only place in the U.S. where you can spot the Colima Warbler (check Boot Canyon along the South Rim trail from mid-April to mid-September). The Chisos Basin is a great place for birdwatching in general, but the best place is considered to be along the river, such as near Rio Grande Village and Cottonwood Campground. Among the countless species you may spot include roadrunners, woodpeckers, cardinals, quail, flycatchers, herons, hummingbirds, cliff swallows, owls, hawks, golden eagles, vultures, and peregrine falcons.

A great variety of animals make their home here, such as pig-like javelinas (pronounced "have a LEE nah" — and they're thought to be more closely related to hippopotamuses), mule deer, jackrabbits, skunks, raccoons, rock squirrels, kangaroo rats, coyote, foxes, and, in the mountains, rare black bears, mountain lions (AKA "panthers"), and white-tailed deer. They are all mostly shy, but you have a good chance of seeing them along roadways or even in the developed areas, especially starting at twilight. You may also glimpse snakes such as the "red racer" (western coachwhip), huge bull snakes (which have a tail like a rattlesnake but are not dangerous), and a small variety of venomous snakes. Lurking among the rocks are lizards: common whiptails, crevice spiny lizards, and earless lizards, along with the rare Texas horned lizard and large leopard and collared lizards. Around the river live turtles such as the Big Bend slider, amphibians such as the leopard toad, and mammals such as beavers. The endangered Mexican long-nosed bat is found only in the Chisos Mountains in the United States, while the entire world's population of Big Bend mosquitofish (or Gambusia) is found in one pond, near the Rio Grande Village.

Wild and primitive Denali National Park encompasses about 9500 square miles (approximately 6 million acres). And year after year, many visitors travel to Denali Park, making it one of the top Alaska travel destinations. Roughly 400,000 travelers journey to the park every year, between late May and early September.

Denali National Park is located about 240 miles north of Anchorage and 120 mile south of Fairbanks on the George Parks Highway. No Alaska vacation would be complete without a trip to Denali Park.

[16]
In 1956 Lawrence Rockefeller, through the non-profit organization Jackson Hole Inc., donated 5000 acres of land on St. John to the National Park Service. On August 2nd of the same year United States Congress passed legislation to establish the Virgin Islands National Park. The legislation stipulated that the Park’s holdings on St. John could not exceed 9,485 acres. St. John contains a total of 12,500 acres. In 1962 the boundaries of the Virgin Islands National Park were expanded to include 5,650 acres of submerged lands and waters that contain a significant amount of coral reefs, shorelines and marine life. In 1978 the Park again expanded to include Hassel Island, a small island located in St. Thomas' Charlotte Amalie Harbor.
[17]

n 2001 the Virgin Islands Coral Reef National Monument was established from 12,708 acres of federally owned submerged lands off the island of St. John. This area, administered by the National Park Service, protects coral reef and mangrove habitat crucial for the biological diversity of the entire Caribbean.

The Virgin Islands National Park encompasses underwater areas that teem with marine life, gorgeous white sand beaches and acres of lush green forests. The land and sea are not the only treasures in the park, there are also historical treasures including Pre-Columbian Amerindian settlements, Danish colonial sugar plantation ruins, forts and a marine railway.

While the concept of the Continental Divide might be a big yawn to kids, the scenery won’t be. The line that separates watersheds that drain into the Pacific Ocean from the river system that drains into the Atlantic or Arctic oceans is a great place to see gorgeous mountain scenery. Take the kids and check out the peaks of the U.S. and Canadian Rockies, including this scenic overlook in Banff National Park.

Each year, millions of visitors come to Banff to marvel at the emerald waters of Lake Louise, walk amongst the flower-filled heavens at Sunshine Meadows, and drive beneath the towering jagged peaks lining the Icefields Parkway. Snow-capped peaks, glistening glaciers and sweeping vistas are just one part of the allure of Banff National Park.

There is a reason the name of Delicate Arch contains the word “delicate.” Although the iconic span often featured in photographs and paintings, as well as on Utah license plates, has withstood centuries of wind and rain, human contact now threatens to ruin its natural beauty.

That’s why we support park managers’ plan to revise and possibly strengthen limits on rock climbing and canyoneering in Arches National Park. The changes would expand rules already in place that prohibit all rock climbing on any arch or natural bridge named on U.S. Geological Survey 7.5 topographical maps. Also prohibited is the practice of slacklining, walking on a flat nylon webbing or rope between rock formations, trees or other natural features in the park.

The existing rules did not stop Dean Potter, a professional climber who scaled Delicate Arch in 2006. Potter said that making the ascent had become an obsession. We saw it more as an ego trip and a chance to advance his climbing career. There are always a few irresponsible climbers or canyoneering aficionados who are stubbornly determined to go where no human has gone before, and who believe that rules meant to protect the landscape don’t apply to them.

Canyoneering is especially hard on fragile landscapes because it involves cross-country hiking and climbing and has become so popular that the sheer number of people and their equipment are threatening scenic park land.

The Arches National Park staff has put together a list of possible new rules and policies that seem reasonable for dealing with the potential problems so many recreationists can create. The agency rightly will collect public comments on the proposed new rules and seek advice from the climbing community before deciding which to adopt.

The plan includes: building a database of routes and use patterns that catalogs the effects of visitors’ activities and the status of the natural resources in the park; educating climbers; initiating on-going planning to deal with changes; and increased monitoring. Specifics, based on the data collected, might include adopting a permitting system and limits on group size, developing canyoneering routes and climbing approaches and prohibiting access elsewhere, and specifying the type of equipment allowed.